Electrolysis can be used for the following:

– Facial Thread Veins – commonly found around the nose and on the cheeks
– Blood Spots – bright red vascular blemishes frequently found on the midriff, back or front
– Spider Naevi – a central dilated capillary with smaller capillaries like the legs of a spider
– Skin Tags – commonly found on the neck, underarm and areas of friction
– Milia – tiny white hard lumps containing keratin

Here at The Mulberry Spa we only use Sterex professional products. Disposable probes are used to totally eliminate cross infection.

Advanced Electrolysis can be used for the following: 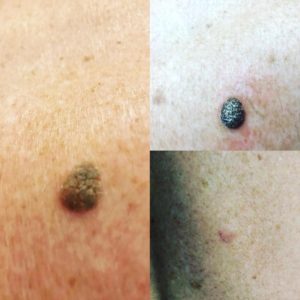 Age spots (also known as liver spots) and hyper-pigmentation mostly occur on areas frequently exposed to the sun. They vary in size, shape and colour. They are caused by a build up of lipofuscin (a yellow pigmentation created by the aging of the collagen producing cells).

Whilst they are often referred to as ‘liver spots’ there is no physiological connection between the marks and the liver. Advanced Electrolysis provides a quick, safe and simple solution to the removal of age spots, leaving your skin looking clearer and younger.

Blood spots (also referred to as cherry spots) can be unsightly red blemishes located under the surface of the skin. Blood spots tend to be slightly raised and can vary in size, but are usually quite small. They are more common in men than women.

Electrolysis can effectively remove blood spots, leaving no trace whatsoever. The process is safe and very straightforward. Blood spots can be unsightly, and many people choose to have them treated, especially if they appear on the face or other visible areas of the body.

Milia can appear as a singular mark, or in a cluster. They are commonly found on the face around the eye and cheek area. They are slightly raised bumps that can vary in size but are usually quite small.

Milia are often associated with dehydrated or dry skin, which can lead to clogged pores and subsequently milia. They require professional treatment and electrolysis is a safe and effective way to remove them.

If you are unsure about any moles on your face or body, you should seek professional advice. Electrolysis can however effectively reduce the appearance of unsightly ‘normal’ moles, significantly reducing size and colour.

Whilst ‘normal’ moles are common, dependent on their size and location on the body they can be unsightly. Advanced Electrolysis is an effective way to reduce the size and appearance of moles, with impressive results. The size and appearance of unsightly moles can be visibly reduced and improved using Advanced Electrolysis techniques. However, for the patients safety, it is essential to ensure that the mole is a perfectly normal healthy mole before treatment can commence. Healthy moles are often pigmented growths or small blemishes on the skin that commonly appear in the first few decades of life in almost everyone. The average young adult has about 25 moles. Unusual or atypical moles can signify an increased risk of melanoma although malignant melanomas can arise from both existing moles or from healthy skin. The ABCDE rule helps recognise suspicious moles. A—Asymmetry, B—Blurred Borders (irregular, or jagged edge) C– Colour variation D– Diameter larger than 5mm (1/4 inch), E—Elevation (especially when uneven) E– Evolution (changes over time). Referral to a GP may be necessary prior to treatment.

A sebaceous cyst appears as a smooth, raised, skin coloured dome on the surface of the skin. They can vary in size and can appear with an open or closed top. They are more common on hairier areas of the body.

Sebaceous cysts are prone to infection and therefore best treated. Providing they are not too large, electrolysis can be an effective treatment solution. More than one treatment is usually required.

Seborrheic keratosis is a benign skin growth that manifests itself as flat or slightly elevated lesions that are brown or black in colour. They can occasionally resemble a wart and tend to appear with age.

The marks can resemble melanoma skin cancer, although there is no connection to melanoma. They can also appear to look like liver spots. Seborrheic Keratosis can be successfully and safely treated using advanced electrolysis.

Skin tags are believed to form due to skin rubbing against skin, so are often found in creased areas of the face or body such as eyelids and neck. They are more commonly found on women than man, but can be effectively treated with electrolysis.

Skin tags are also known as Fibro epithelial polyps or papillomas. They can be completely removed with advanced electrolysis treatment, leaving no marks or evidence on the skin whatsoever.

Spider navei consist of a central red spot, surrounded by extended lines looking similar to that of a spider’s web. They can be successfully treated with electrolysis leaving no remaining mark on the skin.

Spide navei can be made to appear worse if the area of the skin is put under stress or pressure (for example, during pregnancy). Extreme heat can also affect their appearance. Electrolysis provides a safe, simple and effective solution.

Telangiectasia are small dilated blood vessels that can develop anywhere on the body, but are most commonly found on the face. They are located close to the surface of the skin and can be easily treated with electrolysis.

The marks can also appear on the legs, but this is often a sign of hidden varicose veins, which must be checked by a medical professional. They can measure between 0.5 and 1.0mm in diameter and appear in groups or clusters. Electrolysis can safely remove Telangiectasia.

Most often found on the hands or feet, but can appear anywhere on the body, warts are contagious growths caused by a viral infection of the skin cells. They are often likened to resembling a cauliflower or hard blister.

Advanced Electrolysis can be used to remove warts, leaving little or no evidence of their existence. Due to their highly contagious nature and their unsightly appearance, many people opt to have warts professionally removed.

If you’d like to receive our occasional news updates, which could include special offers and promotions, please submit your email address below. You can unsubscribe at anytime: